Coopers Beach in Southampton New York: Best Beach in US 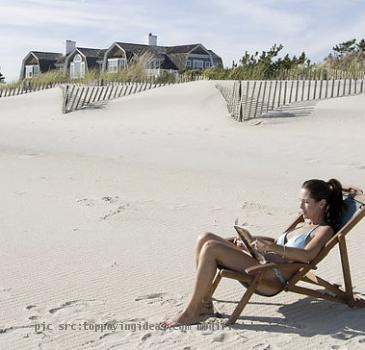 New York (GaeaTimes.com) Coopers Beach in Southampton, New York has been ranked #1 in Dr. Beach’s list of best beaches in U.S. Stephen P. Leatherman, aka Dr. Beach makes an annual list of the best beaches. His deciding conditions include factors like water temperature, sand quality, waves, smell and the presence of jellyfish. Dr. Beach is no less than a scientist who is studying beaches for more than 20 years. He is one of the few scientists who’ll pose on the sand with a stethoscope and medical bag. He studied shore erosion and storm impacts on the beaches. His site DrBeach.Org says,

Nothing restores the body and soul like a stay at the beach. We are naturally drawn to the rhythmic pounding of the waves as if returning to our primordial beginnings.

In the list, the Coopers Beach in Southampton, New York is chosen as the best beach but it has its cons too. I didn’t know that the parking fee in this beach costs a whooping $40! Siesta Beach in Sarasota, Fla is ranked #2 in the list and the Coronado Beach in San Diego, Calif got the third spot. The Cape Hatteras in the Outers Banks, NC gets the forth spot and the Main Beach at the East Hampton, NY also gets a spot in the top five. The Kahanamoku Beach in Wakiki, Oahu, Hawaii is at the sixth spot and Coast Guard Beach in Cape Cod, Mass. is at the seventh spot. The Beachwalker Park in Kiawah Island, SC, the Hamoa Beach in Maui, Hawaii and the Cape Florida State Park, Key Biscayne, Fla. gets the last three spots.

26/11 perpetrators should be brought to justice: British minister

Declaration by the Heads of State and Government of the Nations contributing to the UN-mandated, NATO-led International Security Assistance Force (ISAF) in Afghanistan

Statement by the President at end of the EU-U.S. Summit

Patil assures large Indian Diaspora in UAE of all help